I Know Who’s Trying To Kill You 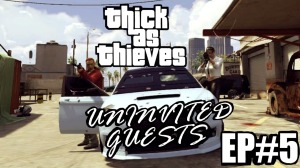 Tomorrow at 6pm GMT, the fifth episode of a seven part series called Thick As Thieves will air on YouTube. The exciting new web series based on Grand Theft Auto V online stars Adam Weavers, Catherine McRae, Scott Harrison and Darren Kus. Episode 5 sports the largest cast of the entire series and also features the voice talents of Sarka Seborova and Jack Hirst. As with the previous episodes the fifth instalment in the series was written and directed by Andrew Owens.

With Karen having left the team, the remaining members must find a way of getting her back or kiss goodbye to the million they plan to steal from the city’s largest vault.  Arthur and Jason carry on with the plans for the heist in Karen’s absence while Rashkovsky tries to convince her that it’s in her best interest to re-join the team. Having made some enquiries, Rashkovsky informs Karen of the identity of the man trying to kill her. Karen must decide on whether to go it alone or put her trust in the other members of the team to save her, who’s motives are both questionable and unreliable.

The sixth episode, Convoy, will air on Thursday September 15th with the final episode to follow two weeks thereafter. To insure that you never miss an episode, click on this link https://www.youtube.com/channel/UCpK56_vvkyC2hCLzdYkAnlQ and subscribe to CLAMSO Productions.

Andrew Owens was born and raised in Canada but has lived in Worcester for the past fifteen years. He is a member of the Worcester Writer's Circle and is a performer of spoken word at various venues in the West Midlands.
View all posts by andrewowenswriter »

Posted on August 31, 2016, in Uncategorized. Bookmark the permalink. Leave a comment.